Yesterday was a downer day for me - I was very hungover until about 4pm cuz I was stupid and drank during the work week. My own fault! So I'm doing two of these today. 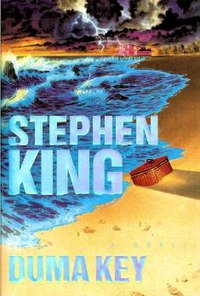 Duma Key by Stephen King
My mom keeps after me about reading this. She has read it about thirty times and says I would love it, but I have only been able to get about eight or so chapters into it.

Wolf at the Table by Augusten Burroughs
For those of you that have read Runnning with Scissors and ever wondered what got the author to that point, here you go. I actually bought this book at LAX because I had a filght home at midnight and unlike everyone else on the flight, I couldn't sleep. So I was the jerk in the plane with the little light on while everyone else slept. I read the entire thing on the flight from LA to Minneapolis. I think more people should read it because it makes you very grateful for what you may not even realize you have. The author tells about his childhood in which he had an awful abusive father from who he craved love. It tells what the man did and also how it later affected the author's adult life and how he still just aches for the love from the person he never got. It will make you bawl because it's something that no one deserves and the thought of it is just awful. However, it is tremendously well written.

My little sister is moving to Kaiserslautern in December. She is marrying her fiaance, who is in the military and is stationed there. Yeah, I'd be lying if I said I'm not totally jealous of her right now because those of you who know me know that I adore the German culture. She knows nothing of it and does not speak the language at all. However, I now have a good reason to 'have' to go to Germany. We used to have a girl at work whose family lived in China and whenever she had to go over there, they were cool about it. Plus, I've already talked to my boss about it. Argh, this is crazy...
Collapse