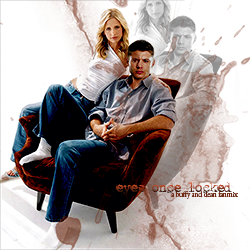 This fanmix was made due to the insanity of 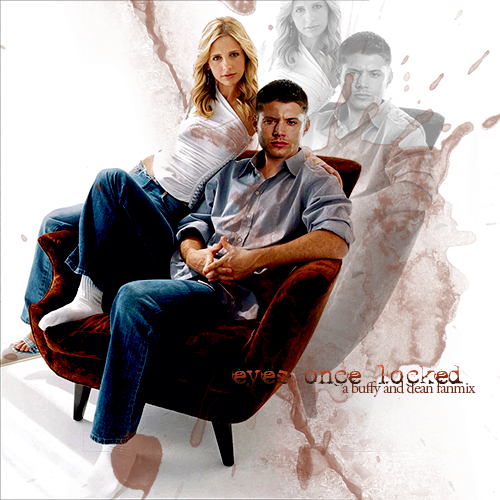 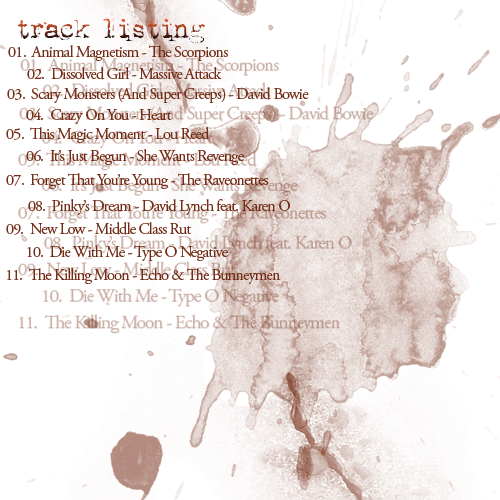 - Animal Magnetism: The Scorpions
You get me loose. I want you - it's all I do.
This song is kind of a dirty little theme song for these two, as far as I am concerned. It's a rather unknown Scorpions song, except to those who listen to all of the Scorpions songs, but I feel it is a fantastic song. It also has a rather creepy haunting feel to it as well.

- Dissolved Girl: Massive Attack
Shame, such a shame. I think I kind of lost myself yesterday. Need a little love to ease the pain.
This is a song I feel Dean would sing about Buffy. This seems like the relationship they would have on the road, meeting up once and a while just to make each other feel more human than they are.

- Scary Monsters (And Super Creeps): David Bowie
She could have been a killer if she didn't walk the way she do. And she opened strange doors that we'll never close again.
Song is totally about Buffy. I could see Dean giving her crap about it if they heard it in the Impala.

- Crazy on You: Heart
Let me go crazy, crazy on you.
I think this is an easy one to figure out. I love this because it's a classic rock song (Supernatural, cough) and fits these two in happier times very well.

- This Magic Moment: Lou Reed
This magic moment - so different and so new, was like any other until I met you.
This song always reminds me of a couple meeting, obviously. This is from David Lynch's film, Lost Highway, and is my personal favorite version of the song because it has a very different feel than the other versions.

- It's Just Begun: She Wants Revenge
In a dark room with our secrets, thinking no one sees, but still, they always know. Whisper to me softly, "I'm your's."
She Wants Revenge has now become one of my favorite bands EVER, so they had to be included on this deal. This song seemed well fitting for when hunter meets slayer, what with their secrets and all.

- Forget That You're Young: The Raveonettes
Can I fall awake now?
This song is so relaxing and beautiful, in my opinion. It seems something that if I was to write about these two, it would be featured in a time when they had no hunts to do and were calm and collected.

- Pinky's Dream: David Lynch feat. Karen O
Please, Pinky, watch the road.
This song always reminded me of driving around in the middle of the night. Which any Supernatural fan will immediately associate with the boys and the Impala. I could see the two of them riding around and Buffy telling him to constantly watch the road.

- New Low: Middle Class Rut
How did I get so far from where I was? When did I decide to lose my way? Who have I become?
I see this song as being one that occurs in the darker side of this couple.

- Die With Me: Type O Negative
Girl, I want to die with you in each other's arms. If this was the last time, could I hold you all life long?
This works for this couple in the sadder times, when either one of them dies.

- The Killing Moon: Echo & the Bunneymen
So cruelly you kissed me - your lips a magic world.
Love this song. It works on so many levels. For these two, I see it working for happier times, when they get to ignore the world around them.